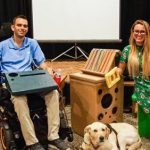 By Contributing Writer: Michael Theobald In American television, characters with disabilities are rarely portrayed in reoccurring roles, especially on network television. There’s a new show on Fox called Speechless, which is centered on a family with three children, one of whom has cerebral palsy and uses a wheelchair. There are countless numbers of reasons why […]

Playground For All Complete! We are so excited to announce that our brand new, fully-accessible playground at ARISE at the Farm is complete and ready for play! We are so incredibly grateful to everyone who help make this dream a reality. Check out this video created by the Central New York Community Foundation, one of […]

[On screen] United Way presents a story from our Oswego community. It’s our community…it’s personal. Flossie (Oswego resident): I’ve lived in Oswego County all my life. ARISE helps people out with equipment for their convenience. Before ARISE came, I wasn’t able to get off my front porch, or get in my vehicle, or go anywhere being that […]

Make a difference by showing your support at one of our special events!

The Power of the ADA

By Contributing Writer: Michael Theobald This year, the Americans with Disabilities Act is celebrating its 23rd year of existence. I have used a wheelchair for twelve of them, and I couldn’t imagine the country without the ADA compliance rules. The Americans with Disabilities Act (ADA) is federal legislation that protects the rights of people with […]

Where Opportunity Meets Success – Helping People with Disabilities Find Meaningful Employment in the Community It’s no secret that Chris loves his job. Last year, Chris came to ARISE looking for some assistance with landing his first job. After meeting with Chris and assessing his skills and goals, our employment team matched him with the […]

Background about the Challenge Media Coverage About the Challenge Background Everyday, we see the power that the horse has to change lives. Therapeutic riding has successfully helped our participants achieve their physical, social, cognitive, and emotional goals. Physically, the horse’s gait simulates normal human ambulation in the trunk and pelvis of the rider and can help […]